Our Weekly Featured Poem is: I have less now than I had before by Karla Bardanza

Try to imagine you attend a public hypnosis demonstration. Your friends set YOU up as the subject. We prompt you to write a poem about what then happens, using strong imagery. Be original, avoiding clichéd hypnosis acts.Let your imagination flow and have FUN writing.

Registration & Membership in Poet Share is always free! Join today and post your response to the prompt in our Forums at:
http://poetshare.forumotion.com/
Posted by Jamie 54 comments:

I'm all for judicious use of the death penalty, but when there are several of these creeps involved, and more than one direct witness to such a horrible, horrible, crime . . . I say burn them all alive.

When Jackson arrived Sunday afternoon, authorities said Soto told them, Bargo and the 16-year-old boy emerged from a spare bedroom and began to beat Jackson. The 16-year-old told authorities that he and Soto struck Jackson with wooden objects.
Bargo then shot Jackson several times, several defendants told investigators.
Authorities said Soto told them that when Jackson tried to escape, he struck him with an ax handle and restrained him. Investigators say Soto acknowledged helping place the victim in a bath tub, where he said Bargo beat his kneecaps and, realizing Jackson was still alive, shot him again.

Afterward, some group members hog-tied Jackson and put his body in a sleeping bag, which was placed in the backyard fire pit and burned for several hours, authorities said.
His ashes were then put into 5-gallon paint cans and disposed of, authorities said. The house was then scoured with bleach to get rid of the blood.

Jesus can forgive them if he wants to.  He was always a better man than me anyway.
Posted by Jamie 6 comments:

I found this cartoon on McClatchy and it goes so well with what I posted the other day about Birthright Citizenship that I just had to share it with you: 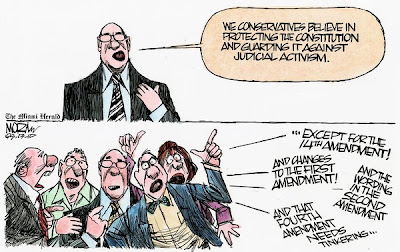 How To Make A Stone Knife

Posted by Jamie No comments:

Life is not at all fair.  Not in the least, tiniest little bit.  I just found out that Kevin (of KevinandPatrick Blog) passed away last week while I was on vacation.

Too young.  Way too young.  I don't know what else to say except he was loved and will be missed and a lot of other cliches that miss the mark.

Damn shit and hell.
Posted by Jamie No comments:

I just had to point this out for my "traditionalist" "the way it's always been" "family values" friends.  From the Wall Street Journal:

Proponents of repeal argue that the 14th Amendment was passed after the Civil War to guarantee citizenship to freed slaves, and that it was never intended to grant rights to the offspring of illegal aliens. But this argument is a non sequitur. At the time of the adoption of the amendment, there was no category of "illegal alien" because immigration was unrestricted and unregulated. If you secured passage to the United States, or simply walked across the open border with Mexico or Canada, you could stay permanently as a resident alien or apply to be naturalized after a certain number of years. And if you happened to give birth while still an alien, your child was automatically a citizen—a right dating back to English common law. (Emphasis added by Jamie)

For all of your "traditionalist" yearnings for what you think the Founders believed, you might want to consider things like the harkening back to English common law cited here, the printing of the Declaration of Independence on Hemp paper, etc.  Much like religion, it may suit you to pick and choose from our history what is sacred and what isn't--but that doesn't make you right.  Calls to alter the US Constitution every time you don't like something (abortion, same sex marriage, immigration) serve only to demonstrate your lack of comprehension of what the word Freedom really means.

When The News Is Made For Mocking 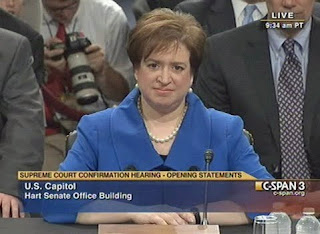 Looks like Rachel Dratch should be getting a call to go back to SNL pretty soon.  The resemblance is uncanny.
Posted by Jamie No comments:

Have a Laugh at Lifelock

Remember that guy who put his social security number on trucks and said it was safe because his company, Lifelock, made those numbers "useless" to anyone trying to use them? Major fail. From Wired:

Apparently, when you publish your Social Security number prominently on your website and billboards, people take it as an invitation to steal your identity.

LifeLock CEO Todd Davis, whose number is displayed in the company’s ubiquitous advertisements, has by now learned that lesson. He’s been a victim of identity theft at least 13 times, according to the Phoenix New Times.

Wherein I Tell The Bigots To Go To Hell

I caught this link at Towleroad and it's sticking with me like a bad hangover; I want to get the taste out of my mouth but the pain is too strong to ignore:

Clay and his partner of 20 years, Harold, lived in California. Clay and Harold made diligent efforts to protect their legal rights, and had their legal paperwork in place—wills, powers of attorney, and medical directives, all naming each other. Harold was 88 years old and in frail medical condition, but still living at home with Clay, 77, who was in good health.

One evening, Harold fell down the front steps of their home and was taken to the hospital. Based on their medical directives alone, Clay should have been consulted in Harold’s care from the first moment. Tragically, county and health care workers instead refused to allow Clay to see Harold in the hospital. The county then ultimately went one step further by isolating the couple from each other, placing the men in separate nursing homes.

Ignoring Clay’s significant role in Harold’s life, the county continued to treat Harold like he had no family and went to court seeking the power to make financial decisions on his behalf. Outrageously, the county represented to the judge that Clay was merely Harold’s “roommate.” The court denied their efforts, but did grant the county limited access to one of Harold’s bank accounts to pay for his care.

What happened next is even more chilling: without authority, without determining the value of Clay and Harold’s possessions accumulated over the course of their 20 years together or making any effort to determine which items belonged to whom, the county took everything Harold and Clay owned and auctioned off all of their belongings. Adding further insult to grave injury, the county removed Clay from his home and confined him to a nursing home against his will. The county workers then terminated Clay and Harold's lease and surrendered the home they had shared for many years to the landlord.

Three months after he was hospitalized, Harold died in the nursing home. Because of the county’s actions, Clay missed the final months he should have had with his partner of 20 years. Compounding this tragedy, Clay has literally nothing left of the home he had shared with Harold or the life he was living up until the day that Harold fell, because he has been unable to recover any of his property. The only memento Clay has is a photo album that Harold painstakingly put together for Clay during the last three months of his life.

With the help of a dedicated and persistent court-appointed attorney, Anne Dennis of Santa Rosa, Clay was finally released from the nursing home. Ms. Dennis, along with Stephen O'Neill and Margaret Flynn of Tarkington, O'Neill, Barrack & Chong, now represent Clay in a lawsuit against the county, the auction company, and the nursing home, with technical assistance from NCLR. A trial date has been set for July 16, 2010 in the Superior Court for the County of Sonoma.

Now I don't know what possible excuse these people have come up with to defend their actions, and I don't care. If you work for a municipality in any capacity and in the course of your official duties you decide to ignore legal documents such as these two poor men had set up ahead of time because it's "against your values," then I hope someone runs you over with a truck. Inject your morality into your own lives instead of CONSTANTLY stepping on ours.

The only way to stop these people is with the threat of actual incarceration, physical JAIL time for interfering with medical or legal directives, regardless of their "moral grounds."

Excuse me while I go kick something now.
Posted by Jamie 1 comment:

The New Symbol of the Republican Party:

I can't decide between Blogger or Wordpress so I'm keeping both active for now, with different posts on each. Go to Imustbedreaming for the other half of my brain. And if you're not a member of Poet Share yet, shaaaaaaame on you!

In proportion as the structure of a government gives force to public opinion, it is essential that the public opinion be enlightened.
---George Washington, in his farewell address


The blinders of group politics will be the death of this society.--QJ of Forgotten Beatitudes

We bared our chests to walk along the beach
Content in warming sunshine on the shore
Two lovers with the future in our reach.

We noted gasps from strangers who'd abhor
A love like ours, forbidden in their eyes;
Yet ambled on, to love and beach explore.

I basked in you, my undeserved prize,
Your handsomeness always in high demand,
An innocence with wit your face belies

You sparkled in the sun and cast a spell
That day when on the beach love's seeds were sown
A simple thing that only time would tell . . .

For from that day our love has only grown.
For with that timid kiss, the first of ours--
For when you pressed your lips against my own

The sun went down and I saw only stars.